Some information you need to get a basic understanding of this game.

Dreadnought TCG is a game for two players, played one-on-one. Each player prepares a deck that consists of 50 cards and 2 additional caster cards. To win, make full use of unit cards and code cards and reduce all Hit Points of your opponent's casters to 0.

When the HP of all casters controlled by one player reach 0, the game ends. The winner is the player whose caster still has HP left. If both players somehow have 0 HP at the same time, the game is considered a draw.

The publicity and availability of a card are shown by its state. 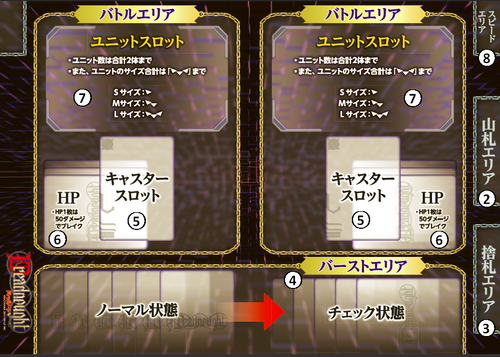 Note: The amount of cards in hands, decks, Discard Piles, Burst Area, and HP is a public information.

Before you start the game, you need these following preparations.

In this game, the player who goes first is not fixed until the end of game. Thus, there's no such thing as coin flips or rock-paper-scissors to determine it. Each turn, all players have the same chance to be the first player or the last player who makes the move.

This phase will determine which player will go first during this turn.

During the Action Phase, each player performs Action actions alternately.

When the turn ends, another turn starts with another Speed Phase.

The cost that has been paid cannot be prevented. The cost paid is still valid even if, for example, a Reaction eliminates the source that generates something you used to pay that cost.

Hit Points (shortened as 'HP') reflects the physical strength and combat motivation of a caster. The parameter of one HP that a caster has is represented by one piece of card.

Battle Power (shortened as 'BP') is the combat power of a unit. The number of BP is used for both offense and defense. It serves as a generator for attack damage and at the same time is used to withstand damage dealt by enemies.

There are three kinds of damage:

Damage is NOT accumulated. To break HP or a unit, the amount of damage must be equal or higher than the value of HP or that unit's BP, and only dealt once.

[Re] is referred to as Reaction action. It is an effect that interrupts something inside a process and resolve in reverse order.

There is a sub-effect written at the bottom section of each unit or code card. You may play sub-effects from your hand or your Speed Area any time according to its timing note. If you want to use a sub-effect, you must clearly tell that intention to your opponent.

Enchants provide additional effects that will last until End Phase. Place Enchant cards on top of the targeted unit or caster. Discard all Enchant cards during End Phase.

God Draw can create a possibility of improving the situation you are in, whether when you are cornered or one step away from victory. It is exactly like pulling a miraculous chance. Its rule is generally similar to drawing cards.

Even if you have no cards left in your deck, if you are required to remove cards from your deck (such as Speed Phase and Draw Phase), you must use any Hit Points card from your casters. This rule is compulsory. Thereby, if all casters (owned by one or both players) have no HP left, the game ends.

Retrieved from "https://dreadnought-tcg.fandom.com/wiki/Basic_Rules?oldid=14182"
Community content is available under CC-BY-SA unless otherwise noted.